To sum up what happen this horrible day: A friday afternoon at 15.22, a bomb went off in our beloved capital Oslo. It was a carbomb that went off right outside our priministers office. You could hear and feel the bang all the way to the train station (Oslo S) and most parts of central Oslo.
I have loads of family in Oslo, and my aunt wrote on Facebook that she was in a cafe not far away, felt the bang and could not stop shaking the rest of the day. My best friends boyfriend works in a building not too far away, they could feel the blast a bit, but the people on the top floor got knocked of their feet..

7 people died and 2 got seriously hurt by the bomb. Alltogheter, 11 people got sent to the hospital.

At 17.27 Nordre Buskerud Police-district got calls about shooting on Utøya in Tyringfjorden.
A man dressed up as a policeman came to the island, telling then that he was there to give a report on what happend in Olso. On Utøya, AUF (The Workers' Youth League) had their annual gathering, about 500 youth(not really sure about this number) He just started shooting people. His plan were to kill them all.

86 kids and grown upps were killed, and they still report more kids missing.. 20 is in hospital with injuries.

Just going to list up some reading to articles to read.
Most of them in Norwegian
*(I used as source) Aftenposten: Alt om tragedien.(Everything about the tragedy)
*Moss got togheter (about 2000!!) to honour the dead and people affected by the tragedy. This was started on Facebook by two young girl that just wanted to say that "we care."
*Join us on holding hands!!! (Sign in wherever you are from to join)
*If you want to write a message to the victims or anything like that (but only positive and good things/ greetings) Write it here
*Our priministers amazing speech
*One of the victims intervju with CNN

I have never been so proud being Norwegian. It's like Carl Bildt said: "Ware all Norwegians".
We stay togheter and do not let this madman(that does not deserve beeing mentioned too much) break us down. People who lived near the island got into their boats to save the children up from the water. In the streets of Oslo they were giving cpr or comferting the one next to them. The busses took all the people that got hurt to drive them to the hospital. Tourists and Norwegians were giving their own clothes and blancets to the kids that had to dive into the water, swimming towards land to save their lives. Random cars picked them up to drive them to a hotel where medical attention were given. We stood togheter and still are, trying to help each other, reaching out to the victims and the families that lost their children.

I am one of the lucky ones, I do not know any of the victims. My family and friends are ok. I still feel heavy. He spitted on our demokraty, on us. On all of us. A tiny but powerful country. He is sick.
I can't stop crying. It feels like my head is going to explode.
Why the kids???? He tricked them to believe he was a policeman and that he was there to save them!!! That is the worse thing ever!!! How can a person be so evil????  I just don't get it!!!!!!!

I feel sick everytime his face shows up on the newspapers, internett, tv or anything else. I wish his face and his name could be removed. He is not important. He is nothing. He can be locked away for the rest of his life and rott.(is that the word??)  He must be ignored.

This was supposed to be me letting it all out about how I feel and everything, but I don't think I have fully realised it yet. It feels like taken out of a movie. Nobody can be that crule?? I'm not sure I wanna see these movies anymore. I know that might change again, but still.

Well, I might write more when my brain works again...

Tonight, my light is for all the lives that still is missing. I hope you all can come home. 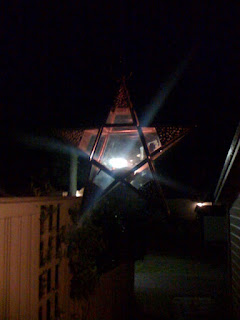 I have to show you guys this blog, this amazing blog about this wonderful family. Thay are happy, they enjoy the small things in life. They are normal, but thay have one challange in life most people don't have. their youngest daughter has Down Syndrome. It might be her photography that makes me love the blog, but maybe the way she sees things(the mum that writes the blog) or her honesty about all the sides of having a child with downs.
Well, what I get out of this blog is how we should celebrate life whitout having something happen to us first..

My man, Steinar, is now after two years of pain in his shoulder finnally having surgery in September.
The pain makes hin not sleep very well, he can't go to the gym and it's days where he almost can't pick up Mina to carry her around. He hates it. But every day he puts her to bed. Every day. And he does not complain, he loves it.
I know I'm lucky, and everyday I makes sure that I make him know that Mina and me are lucky to have him in our life.. :)
OOOOOhh that was all lovy-dovy (NOOOO idea how to write that!!!!!!!!!) (dyslexy-hell)

Enough blogging for today!!!!! Have to go back to making my kitchen look gooooood!!!
Posting pictures later today ;)

I googled Chy Morva (The name on our place in Falmouth) And stumbled over this blog: Emyr has a Blog.
It's a girl that goes to the same Uni I went to, and in the summer she will move into CHY MORVA!!!!! They are three people moving in, and one of them is actually a Norwegian girl. :)

Well, to you guys: Take care of her!! And enjoy your time at Uni. Suddenly you are done and out there in the real world!!! ;) 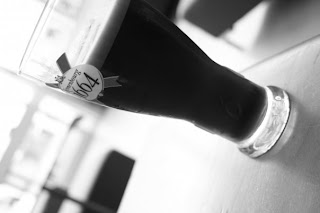 So, I got a call from my dad and Jorunn yesterday.. They just bought a brend new kitchen and have been trying to sell the old one.
After a few couple of day on finn.no, they still haven't got any respons on the add, and they gave up.
Sooooo me and my man are now proud owners of a new old kitchen :)
Our old one are HORRIBLE! It's so full of stains I can't get off the doors and bench, the colours are from the 90's (baaaaaaad) and it's just falling apart.
We have some money that we were going to use to do something about the kitchen, but not enough for new cupboard and doors and everything else!!!! It's going to look great!!
But if you guys have any tips on colours, cheap material or ANYTHING!!! let me know ;)
This is the kitchen how it looks like: 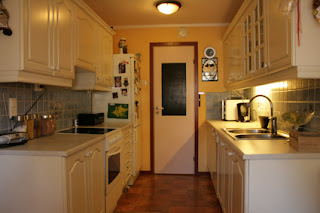 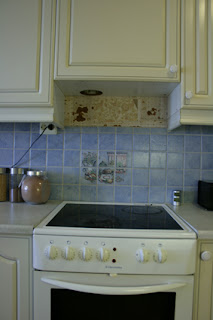 We removed the old fan, but haven't been bothered getting the new one up. you can see the ols wall paper from the 70's, when the house were built..  And loooook at the tiles... BLAH! 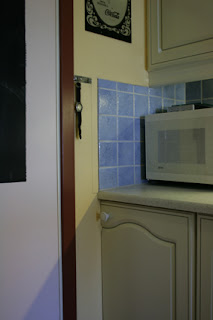 Not only have they cut the door to make it fit, but they have also plastered the wallpaper bit by bit, repairing it.. blah it's horrible... 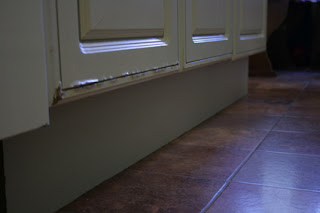 The doors are damaged, they look like plastic bath room doors.. :p 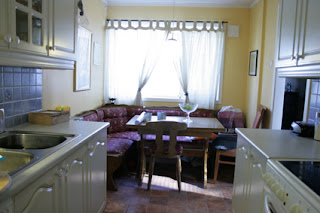 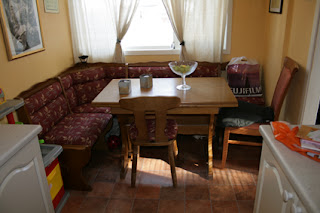 The bench, two chairs and table are for sale. 200,- norwegian kroner, then COME AND GET IT!
A new one would cost you thousands.. ;) hehe 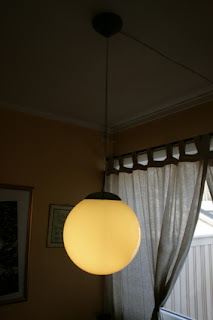 The lamp on the last photo is the only item I wanna keep. The rest is OUT OF HERE!!!! 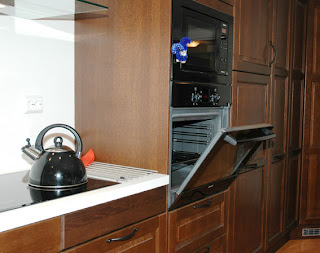 So there you go. Any tips??? The doors are very dark brown. Kinda like this photo (same dark brown colour), but it's not completely same as the one we are getting.
Not the cheap crap we have now :)
What colours goes with it without it getting too dark??
I like kitchens that has a "cafe-look" :) Not sure what that is, but love cafe's in brown and earth-green colours, a bit old fashion style.. I dunno....
heeelp-- :D
Lagt inn av MelancholyandTea kl. 15:52 Ingen kommentarer:

It's in the air

Just want to share
a beautiful day'
with you all 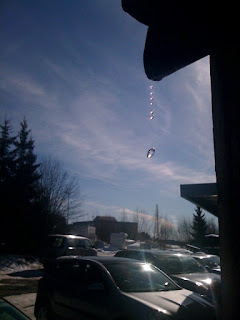 Imagine:
You don't have many photos of your love,
at least not as a child,
except the one
that got stuck to the glas,
and got damaged.
You might be lucky
having a sister that knows her way in photoshop....
Or what Elisabeth?? ;) 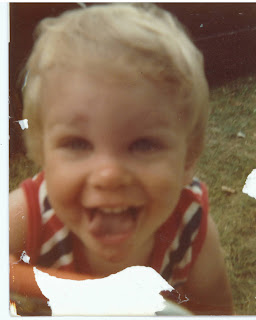 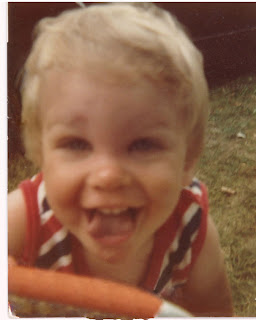 Hope this is what you wanted ;)
Love ya!!
Lagt inn av MelancholyandTea kl. 15:01 Ingen kommentarer: